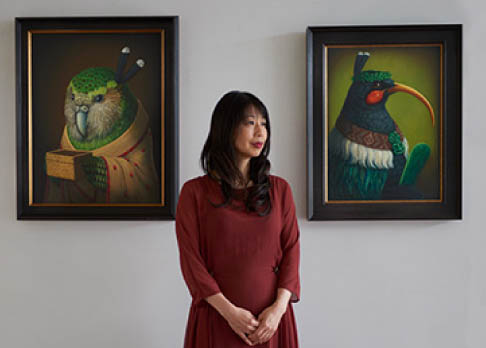 Rieko is best known for her detailed portraits of anthropomorphic creatures, usually animals or well-loved toys. A self-taught artist and illustrator, she was born in Japan and has lived in Wellington since 1999. Her first exhibition was held in 2010, followed by several solo shows and group exhibitions in Wellington and Auckland. Every one of her solo shows has sold out.

Rieko’s work is influenced by Pop Surrealism and the Old Masters. Aesthetic elements of Japanese pop culture such as kawaii (cute) also appear in her paintings, finely balanced with melancholy and knowing humour. Rieko’s subjects seem to be a little reluctant to reveal their stories, and often inhabit fairytale settings that evoke childhood fables. Her paintings provide a small but intriguing window into the lives of her characters.

Rieko is represented by Black Door Gallery in Auckland and her limited-edition giclée prints are available exclusively from Eyeball Kicks Gallery in Wellington.